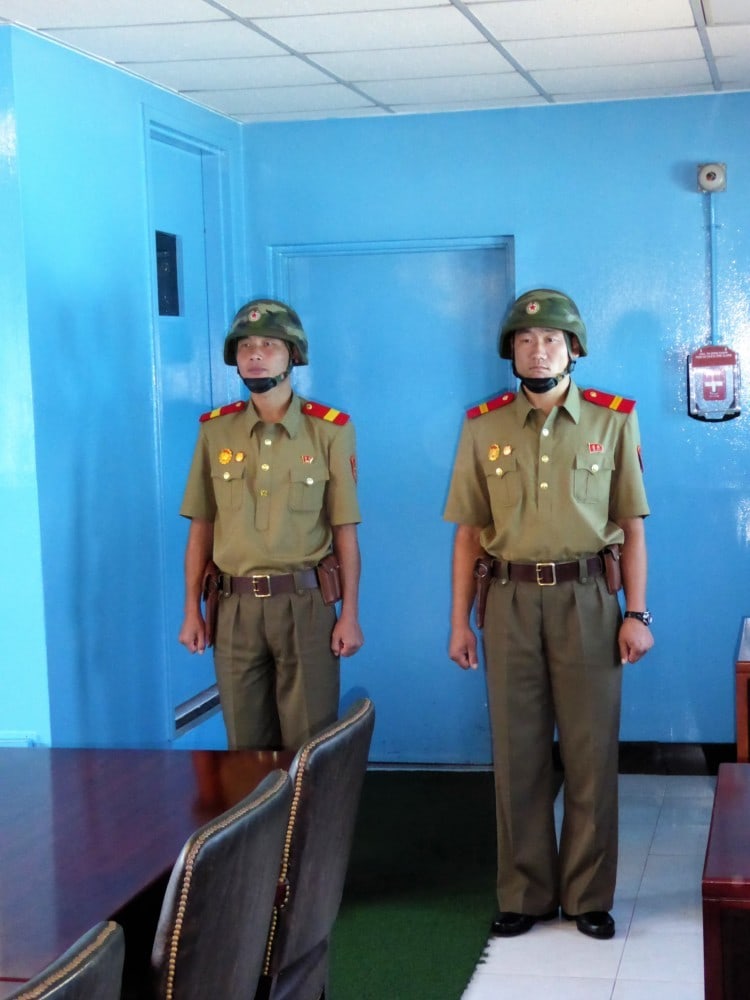 To access the DMZ from Pyongyang entails several hours of driving on a large 10 lane highway that often only has one vehicle on the highway. The highway is large to impress outsiders, but because it is so large it is not maintained properly.

The most interesting part of this drive was when we stopped for drinks. I learned all about the different types of beer as well as how some beers come with extras inside them as is shown in the picture below. 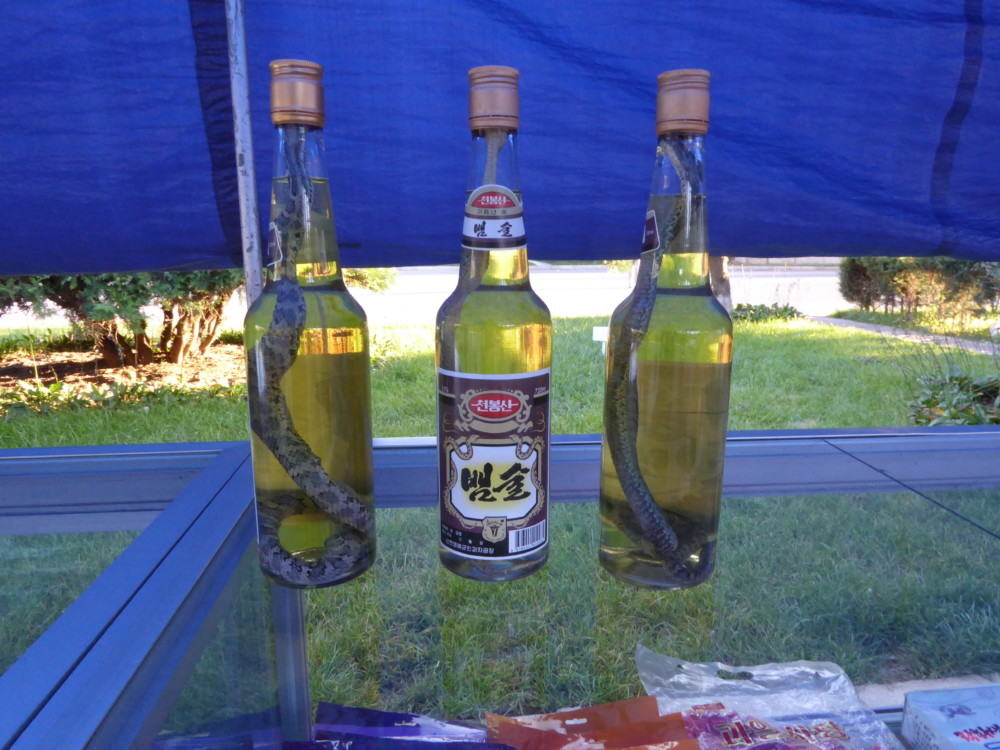 We stayed in the nearby city of Pyongsong, in a hotel with traditional North Korean bedding. It was bedding on the floor with mosquito netting. It was probably my most uncomfortable sleep during my stay. Of course, as a tourist I didn’t complain about anything being uncomfortable, as I knew this was still better than 99% of the accommodations the locals were used to. It was also the worse food that I had during my stay. For breakfast, I could not bite into the toast they served me, and the only thing I ended up eating that morning was one egg. 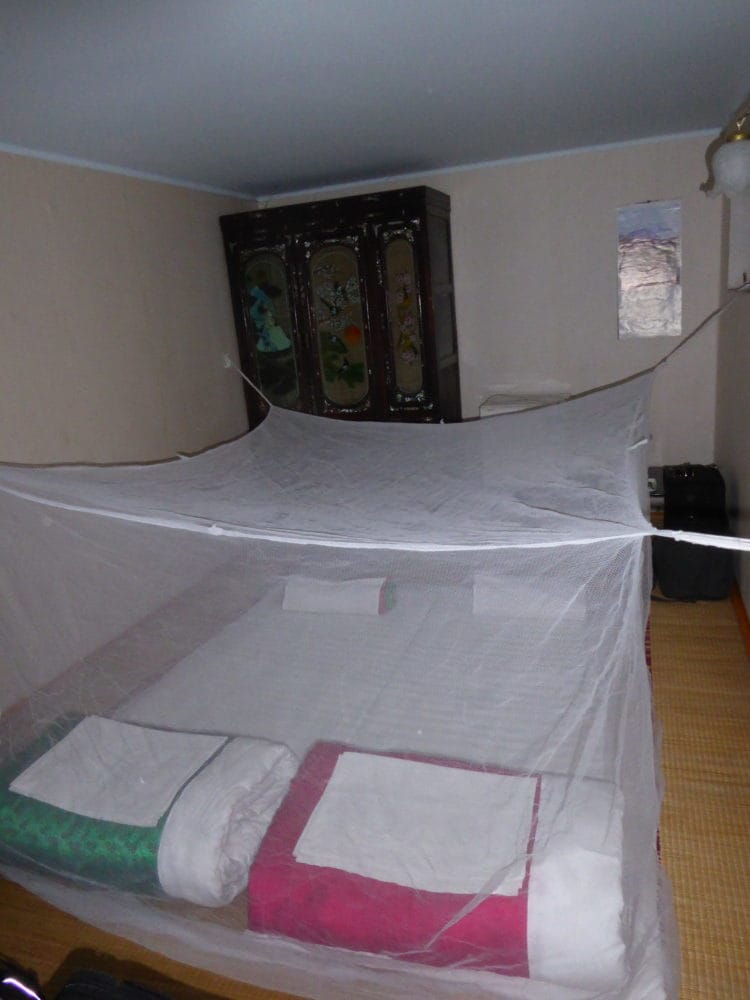 After staying in Pyongsong, I was to see the DMZ from the North Korean side. Of course, North Korea takes advantage of every opportunity to give us lectures on how great the Dear Leaders are, and how evil the imperialistic Americans are.

We were lectured about how America was the mastermind against the reunification of Korea, and how South Koreans were puppets to the United States. This artwork depicts how the average North Korean wants to reunite. It stands for “One” unified Korea. 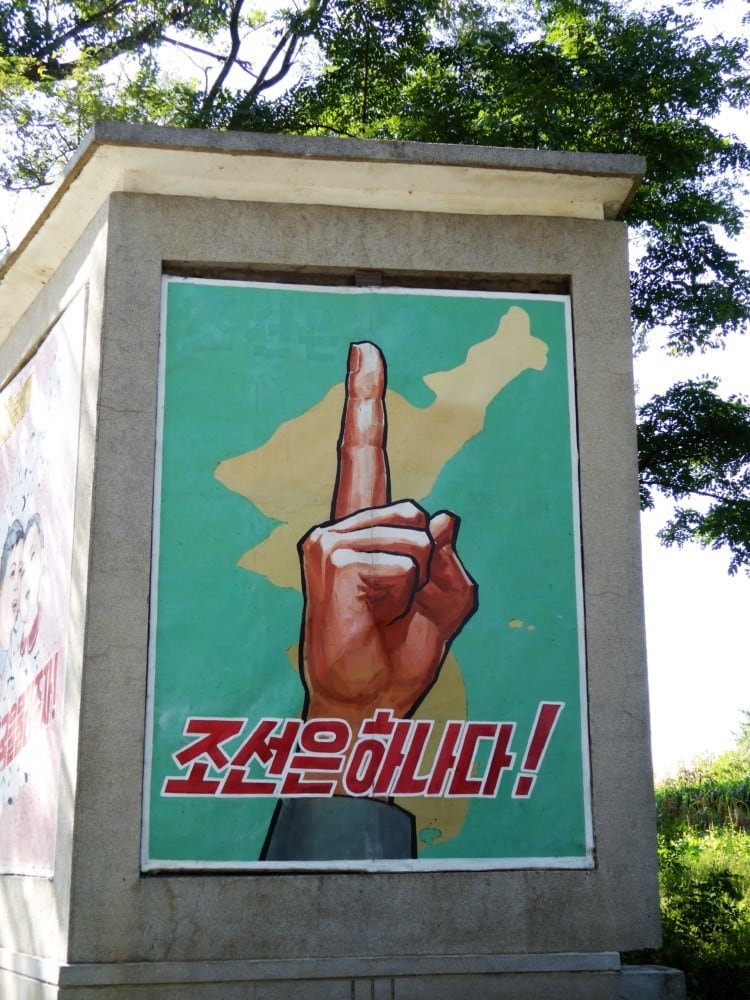 The propaganda was strong at the DMZ. At one point one of the DMZ guides shouted for us to look at a wall that featured a dozen flags. She then informed us, that if our flag was on this wall, our nation was responsible for the war against North Korea. When I saw some countries such as New Zealand and Norway, I had an internal chuckle. 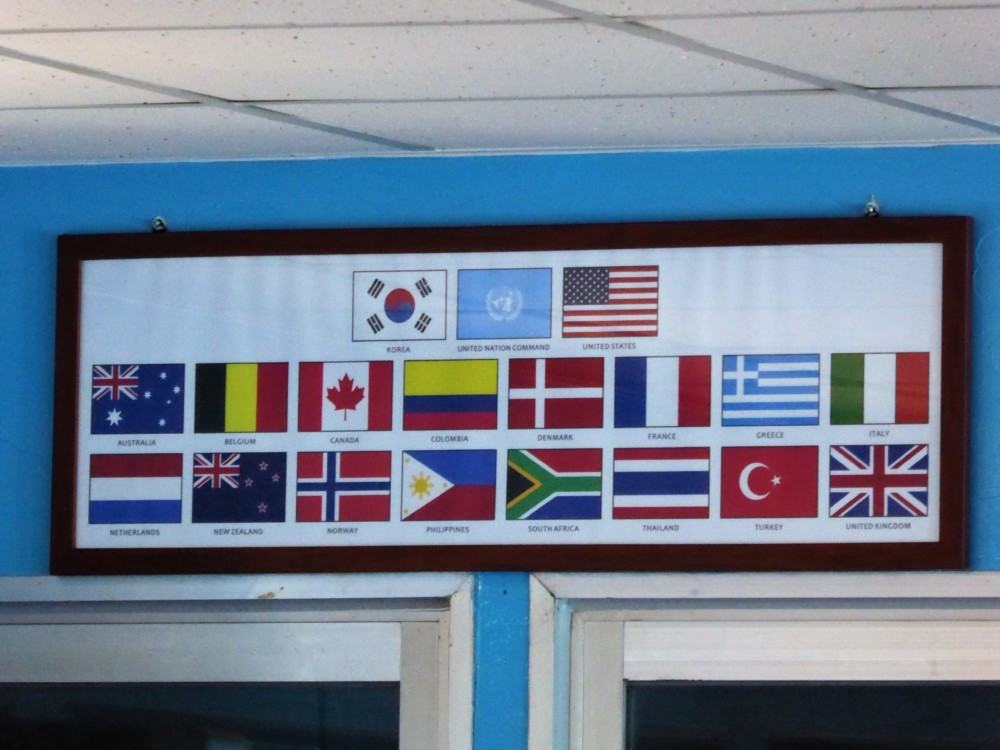 What was most interesting was a conversation with a guard, who guarded the border. He took us aside, introduced himself, and started asking some very deep questions. You could tell that the wheels were spinning inside his head and that he was curious about the outside world. He kept asking us how outsiders perceived North Koreans, and that he was getting conflicting information. We both tried to be as honest as we could without bashing the North Korean government. It was times like these where I felt that us tourists were the only access to the outside world for these people. I felt there was a possibility that potentially we could assist someone with realizing how much their government was deceiving them. 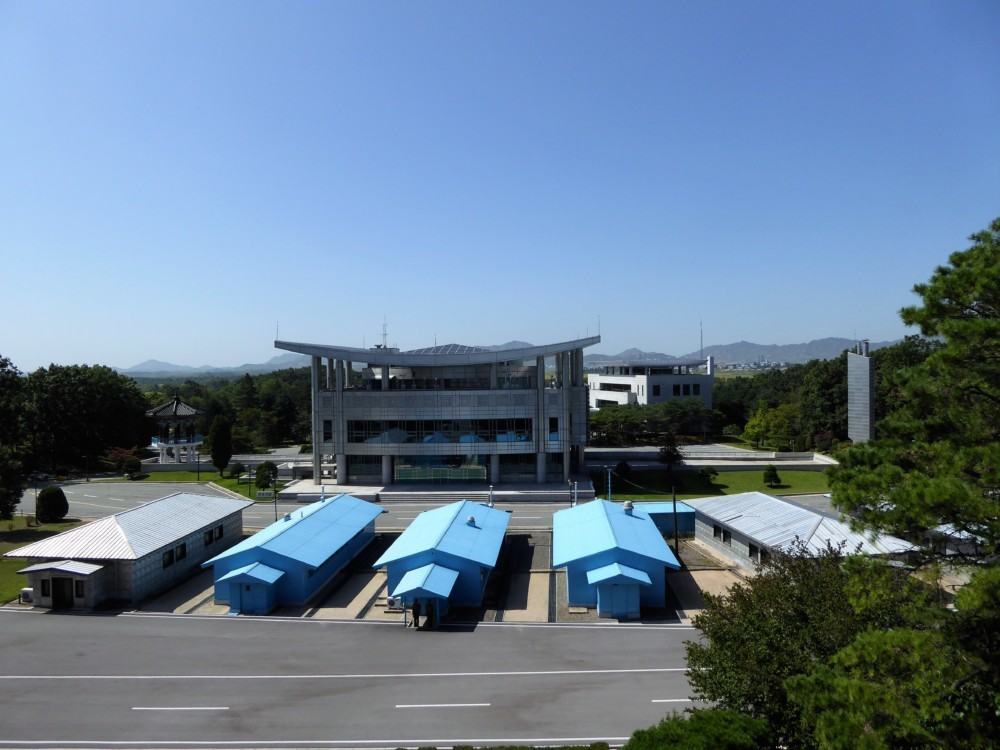 What was even more interesting than the DMZ, was visiting the public library upon our return to Pyongyang. How can this be more interesting? For one, our guides made a big show of letting us know how access to the library was provided to everyone for free.

If you live in Pyongyang, you have access to the library. They then made a show of how there were books and music CDs from all over the world.

The library is like something out of a bad science fiction movie. You go to the ordering desk and you request a book from a specific country. To show us they had books that originated from everywhere, they showed us the process of ordering books that were published in the United States.

With pride, they showed us these books. One was a nature book and the other book was an encyclopedia on different breeds of chickens. Both books would only be read by farmers. In other words, neither book had anything that could be considered offensive to the DPRK.

When it came to music CDs a similar demonstration was given. The examples of music CDs was the Beetles for the United Kingdom, and nature music from Canada. Again, both CD selections could not compromise the propaganda.

Unlike a regular library, books and CDs could not be taken home. You could listen to the music or read your book at a designated reading or listening station.

What was left out of our demonstration, is that while the public library is accessible, only the most elite of North Koreans live in the capital. For most North Koreans, to visit Pyongyang they require special travel permits. Moving between different regions of the country is very difficult. On our way to the DMZ we witnessed a woman being pulled out of a bus crying as she was turned away from a border crossing. I assumed this was because her travel permit was rejected or her papers were out of order. She was clearly devastated and it looked like her world had ended. I felt horrible and powerless, as well as very resentful of the situation.

Like the rest of North Korea, visiting the DMZ was not so much about the actual location and the buildings, but more about the interactions with the locals. 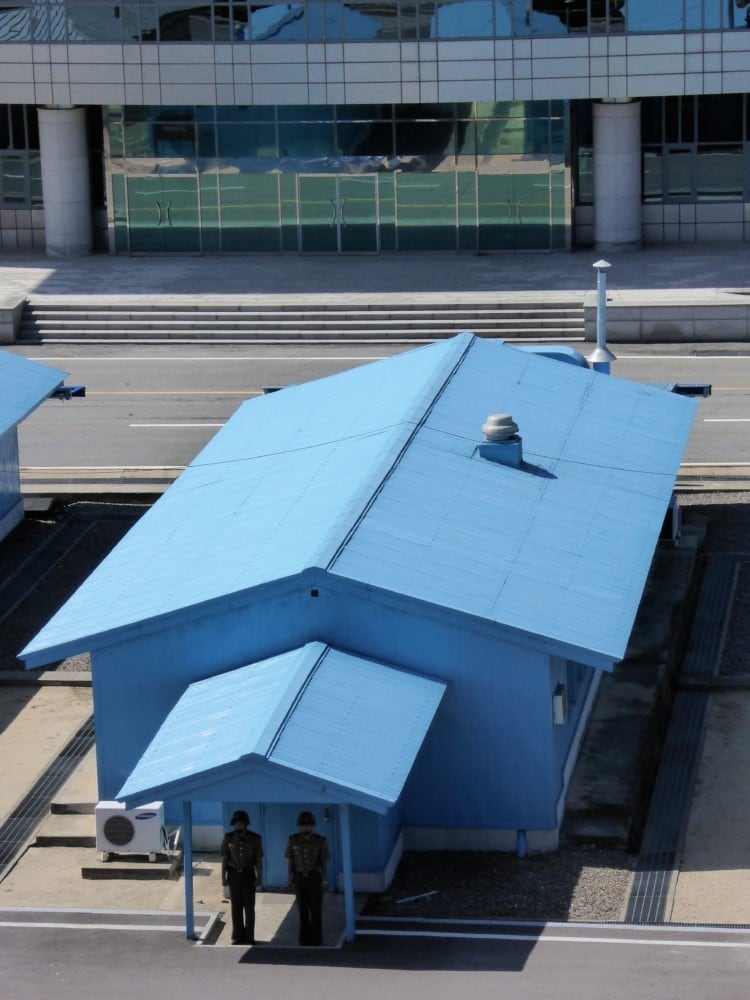