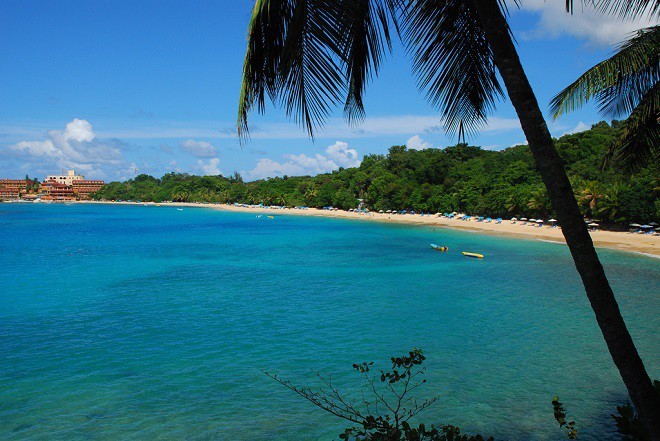 I had a difficult time thinking of what to write about the Dominican Republic. I’ve visited the country twice; the first time was to inspect the Island with the idea of possibly relocating there. The second time was to go to the Hard Rock Café hotel for a wedding. The Hard Rock is an all-inclusive resort and not my speed. Therefore I’ll report on my initial experience.

I flew into the capital of Santa Domingo to begin my trip. The capital has nothing to write about with congested streets, lots of poverty and boring architecture.

I was with a friend who wanted to relocate to Dominican Republic more so than I did so I allowed him arrange the trip. He’d been to Puntu Cana prior to me landing and he wanted to visit areas that were less touristy.

It’s then that we decided on visiting Sosua a city in the Northern part of the country. We paid a taxi to drive us from Santa Domingo to Sosua through the mountains. This took approximately 3.5 hours and allowed to see how the locals really live in small mountain villages that are infrequently seen by tourists. This was actually the highlight of the trip for me as I enjoy being off the beaten path.

Once we arrived in Sosua I was disappointed. We didn’t have internet at our hotel and in the evening, we would walk through the town to an internet café. These walks involved me holding my backpack tight every time someone on a motorcycle approached me trying to sell me cocaine. I immediately felt like a target.

This was before I was used to traveling in more dodgy locations, and to third world countries. At the time, I felt unsafe and like a possible victim. The crime in Sosua is a problem as we heard many reports of car jackings in the area. We met a bartender who admitted that he was on the run from the United States and that he could never return home for fear of prosecution. Sosua was his last hope at living a free life.

Hookers would attempt to talk me into hiring them and when that didn’t work they attempted to sneak their way into my pocket. Whenever I am in dodgy areas I normally keep small bills in my pocket and more important money elsewhere on my person. Because of this I was not too worried but it was still annoying having unwanted hookers trying to steal from me on a regular basis.

The ocean views in Sosua were nice but they were not worth the drive. I also got a nasty case of parasites which I took on the plane with me to Nassau, Bahamas which was my next destination. All in all, it did not make me fall in love with this city or this country.

By far my biggest problem with Sosua is that it had nothing unique to offer. It was not a pretty city; the streets were dirty and drug infested. The only thing it had going for it was the beach. The Caribbean has many beaches so this is not a good enough reason for me to like somewhere.

At the end of the day I decided not to move to the Dominican Republic. It ended up last on my list of potential places to relocate to.

On my second trip, after attending the wedding I did visit a property development for possible promotion on my real estate website. As soon as I met the representative who worked for the developer I instantly knew that the property was a fraud. They were essentially selling properties that they didn’t own to unsuspecting foreigners. I decided not to promote this fraud, and again it reminded me of why I was not a fan of the Dominican Republic. That was the second strike for me.

There are many more islands to visit in the Caribbean that I would recommend.