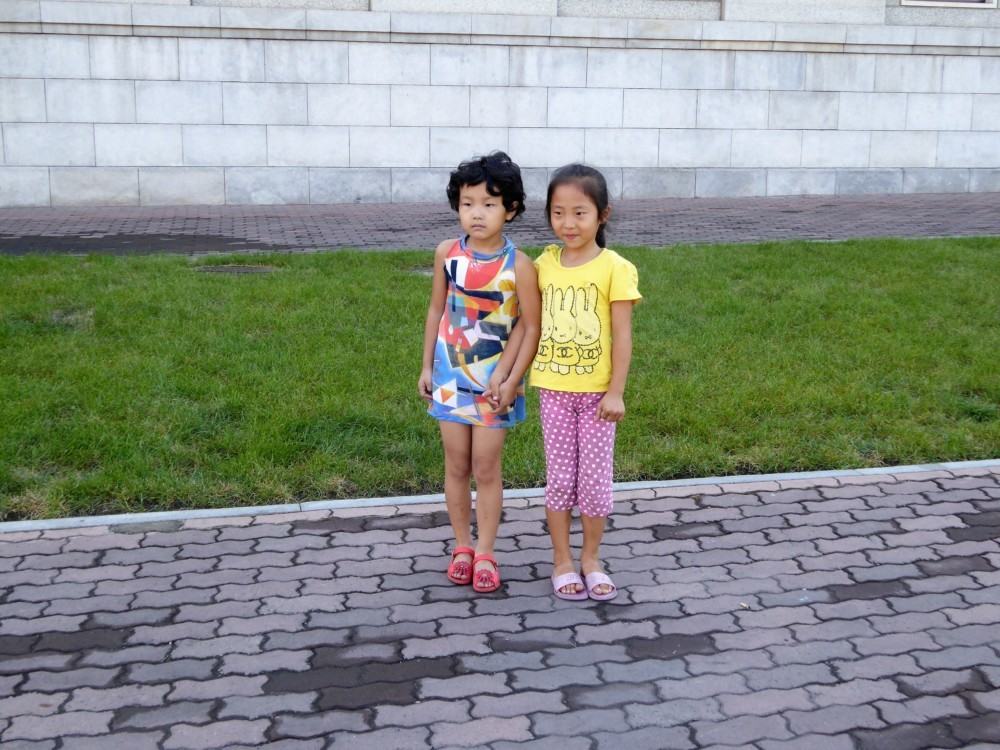 When visiting Pyongyang, expect endless propaganda on how each monument is the result of the genius of the Kim Jong-Un family dynasty. Each fantastical story is so far-fetched, that the story escapes you before you have time to grasp it. 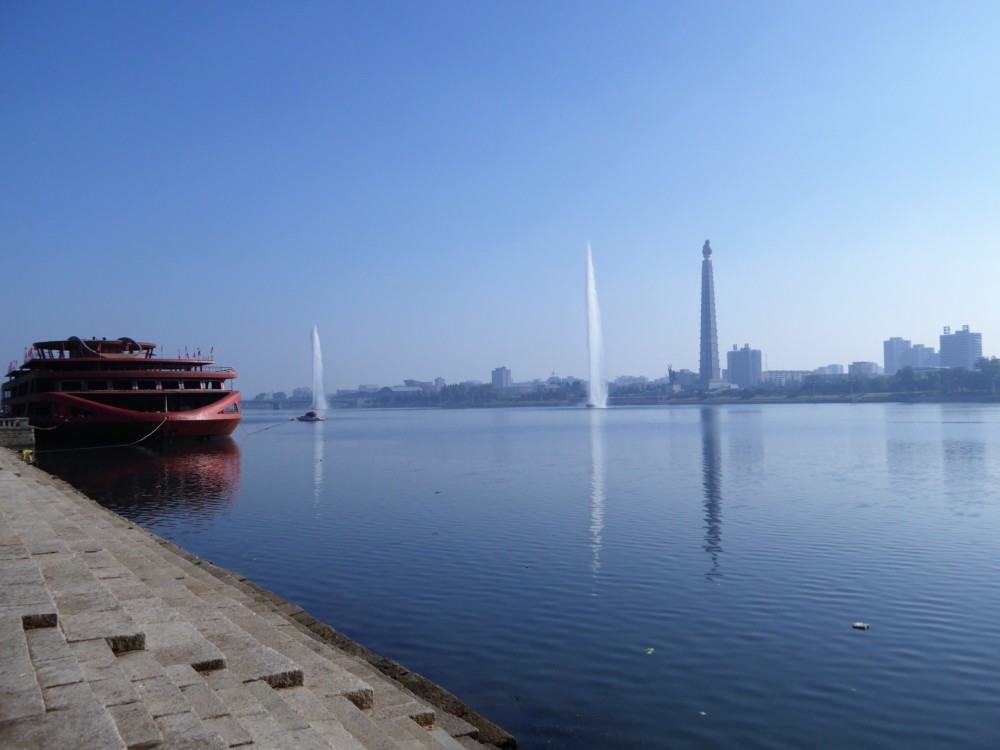 For instance, I might look at a painting, and be told that the colors match the double rainbow that appeared when Kim Jong-il was born. I will then be told that there are X number of paint strokes to celebrate his X birthday. There is no monument, no flower, no food, and no piece of art that does not have some type of associated propaganda. 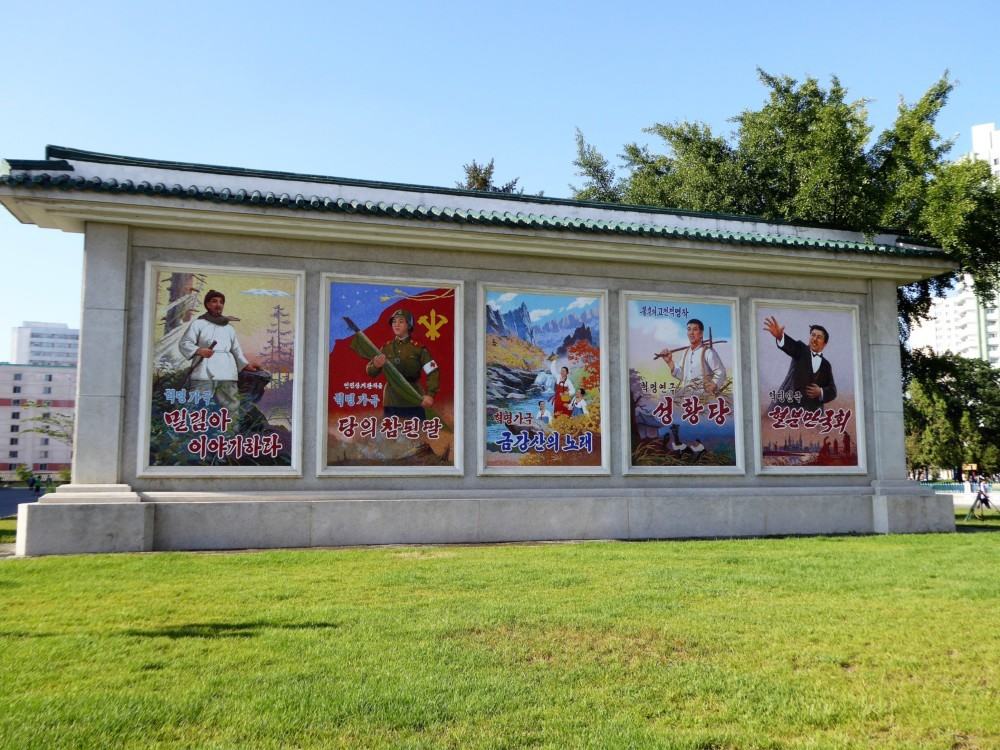 And in case you didn’t know it, Kim Jong-il invented the hamburger, and since his body was so efficient he never had to use the toilet. 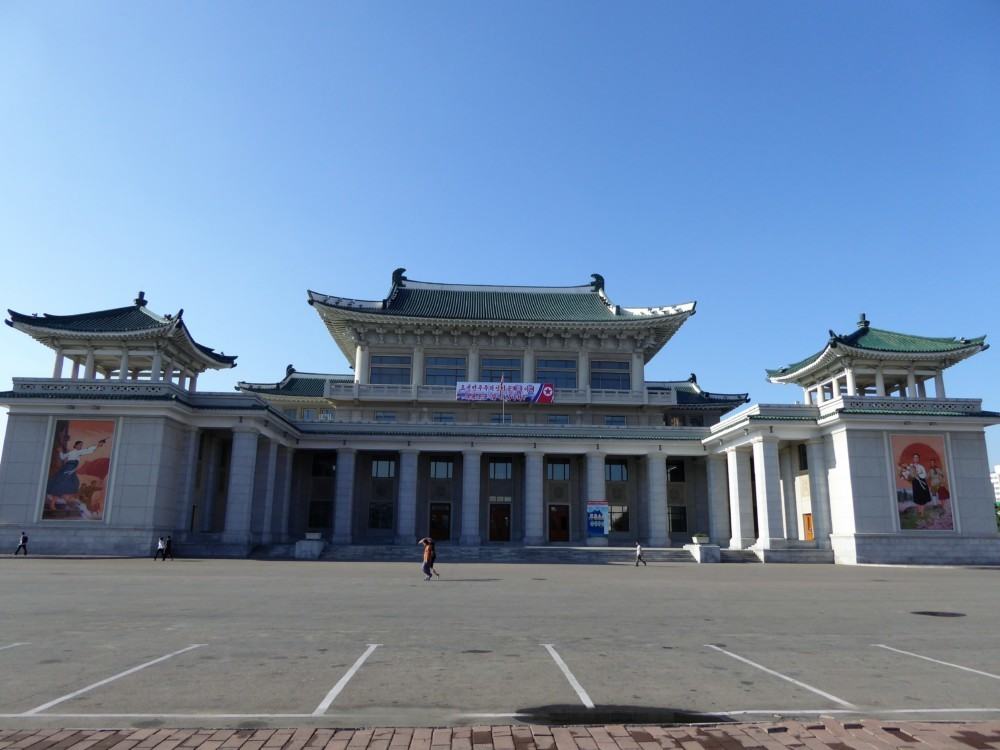 After the first few lectures, we only pretended to listen. The whole time I was attempting to figure out, did the guides believe this nonsense? This was a question I would ask myself repeatedly. 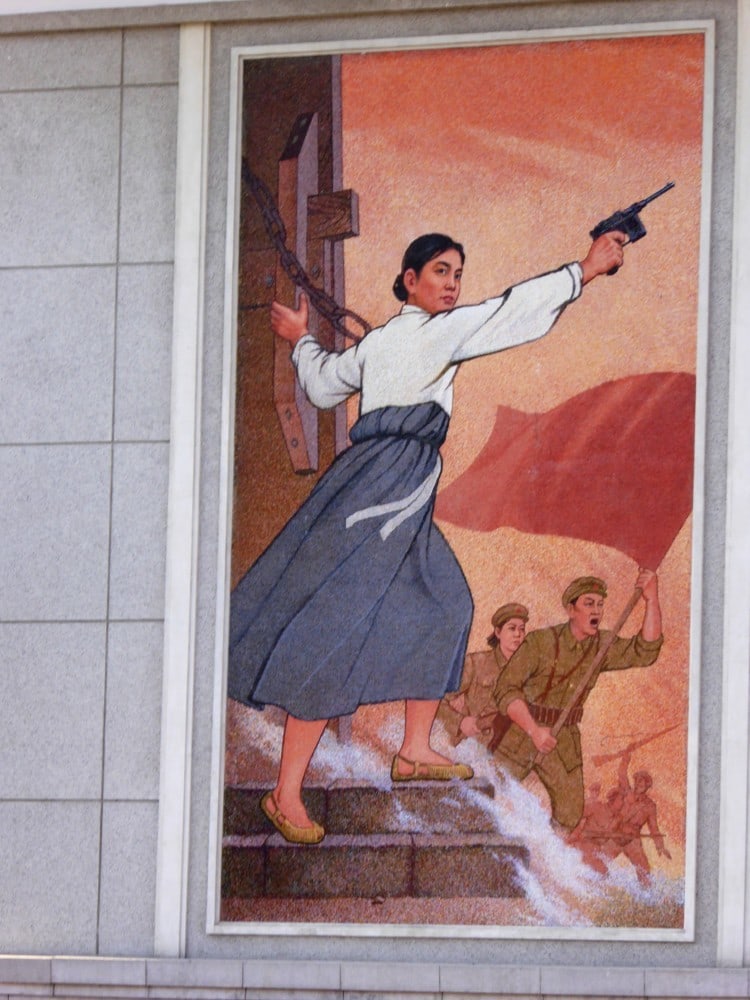 We had three guides, one was the driver who waited in the car, one guide lectured us, and the third guide was there to ensure that we did not take unauthorized pictures. This includes any picture that would look bad on North Korea, or that included soldiers. 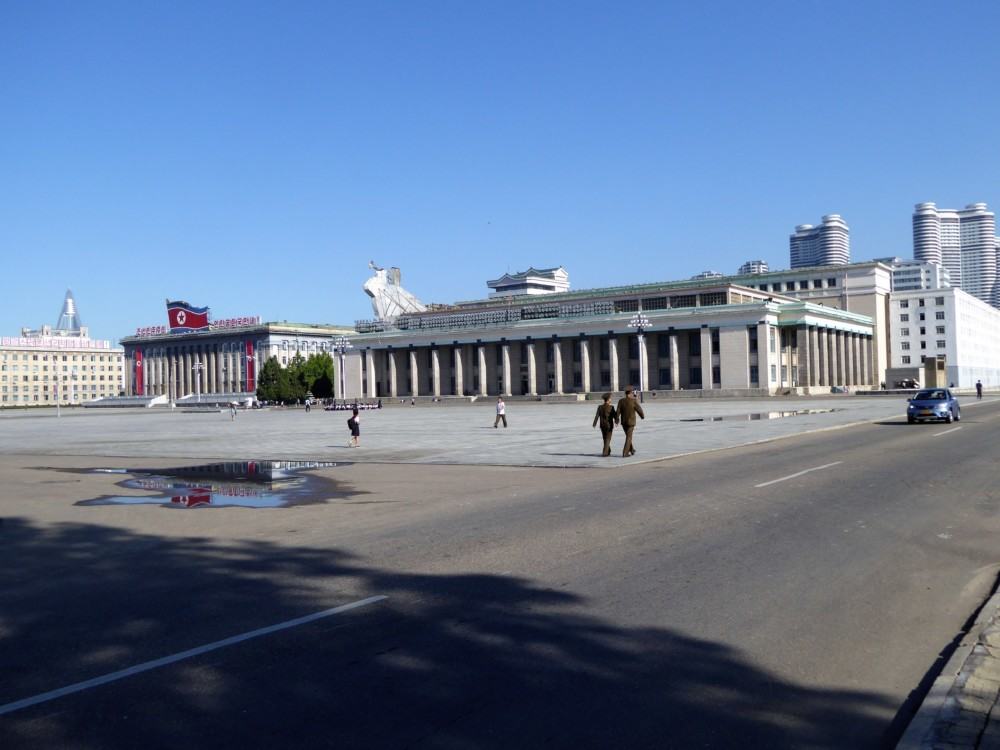 I still managed to take some pictures when they were not paying attention. The secret to this is to take a small camera with not much of a zoom lens. I noticed that guides paid much more attention to tourists with expensive cameras that featured a long zoom lens. 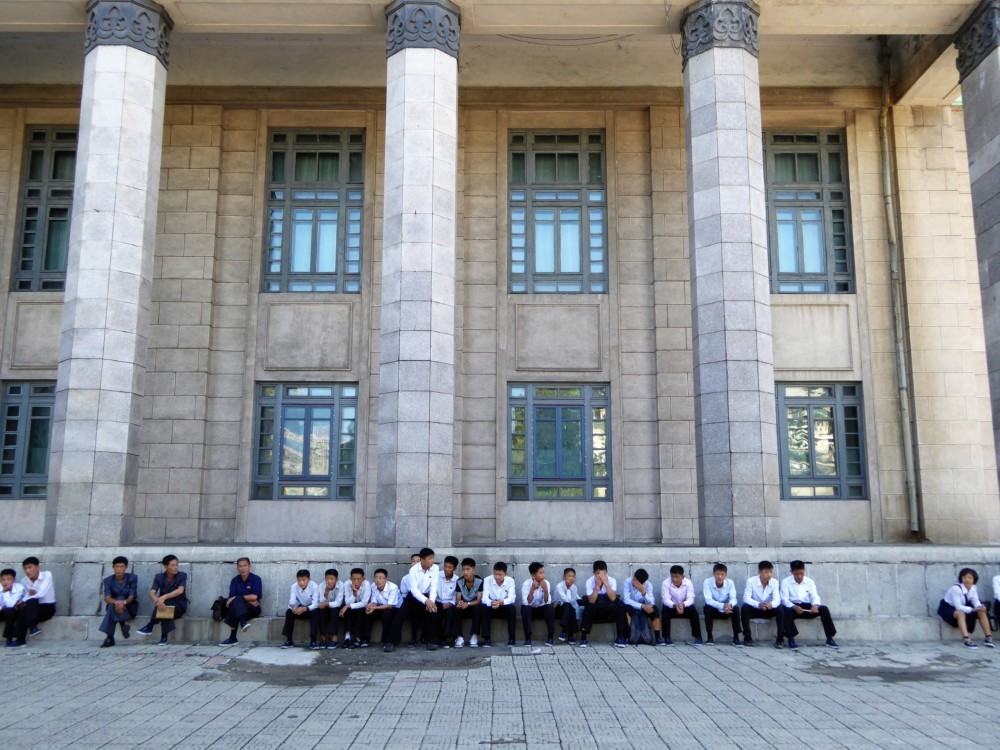 The first thing we visited was the Kim ll-Sung square. Many of the pictures look empty, and this was because I had to strategically wait until there were no soldiers in the pictures. Half the population are soldiers so this can be challenging. 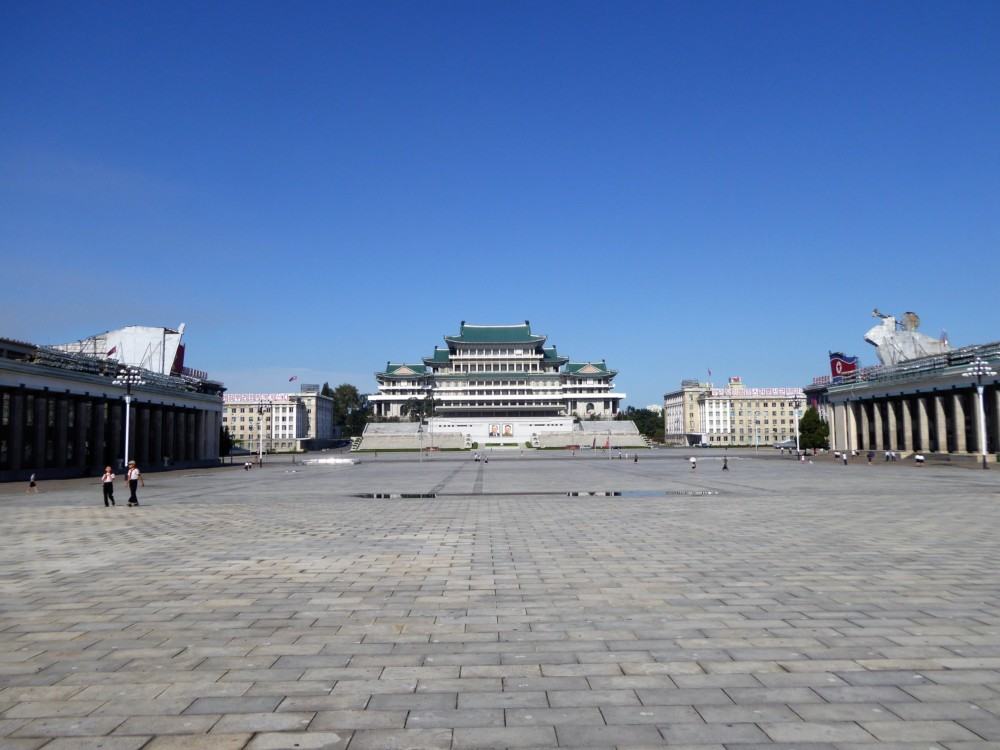 The buildings were a bit boring in a communist way. What was more interesting were the beautiful paintings nearby, all which featured some type of propaganda. The most spectacular monument was the Tower of Juche, which lights up at night, in front of this monument there are three figures, each holding a tool, one represents the worker, another the farmer, and the last tool is the intellectual. 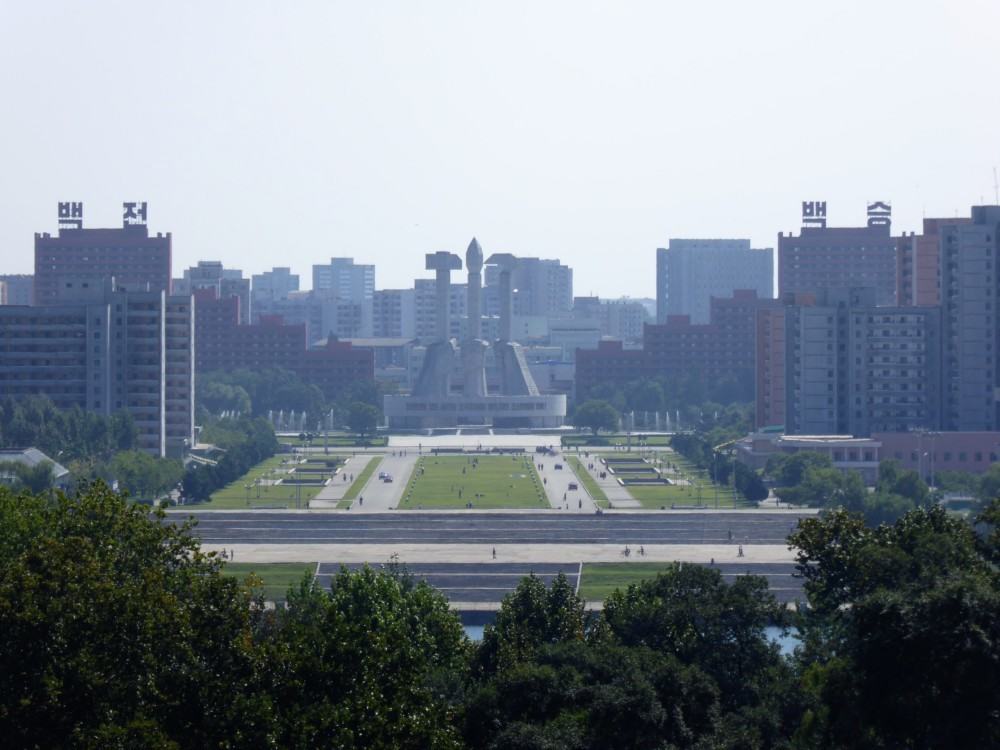 We then went to visit Kumsusan Memorial Palace and other monuments. The truth is none of these monuments mattered. What was interesting were the conversations we had with locals, and watching locals living day to day as we were transported between monuments. 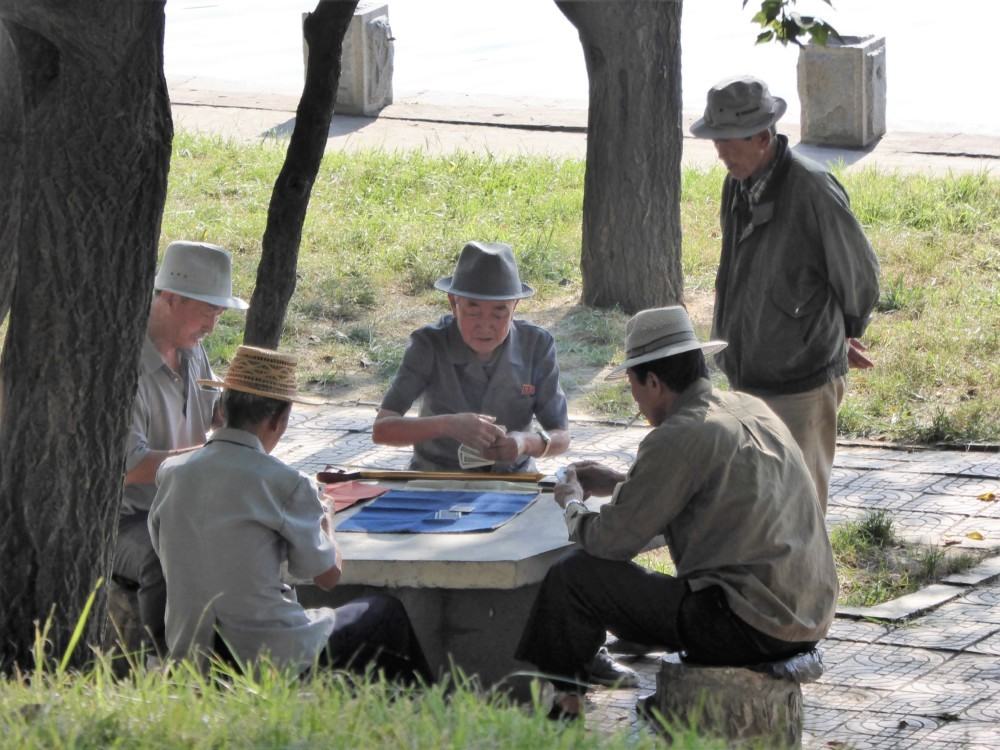 Our guides were still stiff at this point and we didn’t have the opportunity to delve too deeply in their lives. I did learn that once your career is chosen, there is no going back. My one guide really wanted to do something else in life but was stuck with her chosen path. Being a guide is one of the more prestigious jobs in the country, but I think we can all relate to how demoralizing this would be. 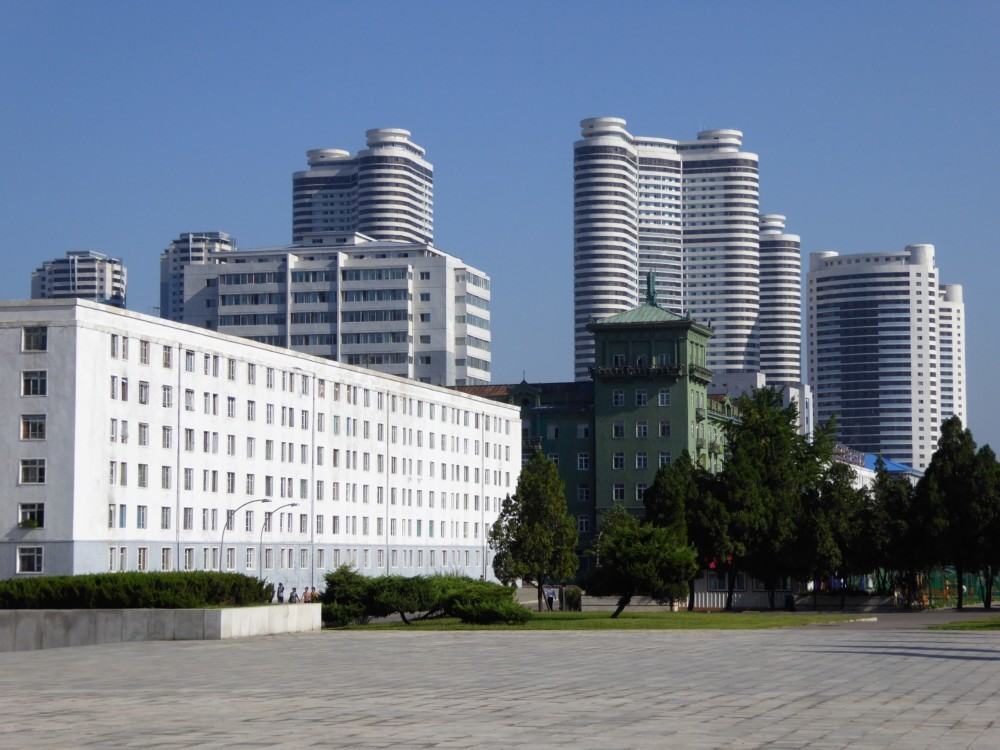 I later learned about her family, and her dreams. Not once did she mention wanting to leave North Korea, but she was curious on our international travels, and my homeland of Canada. 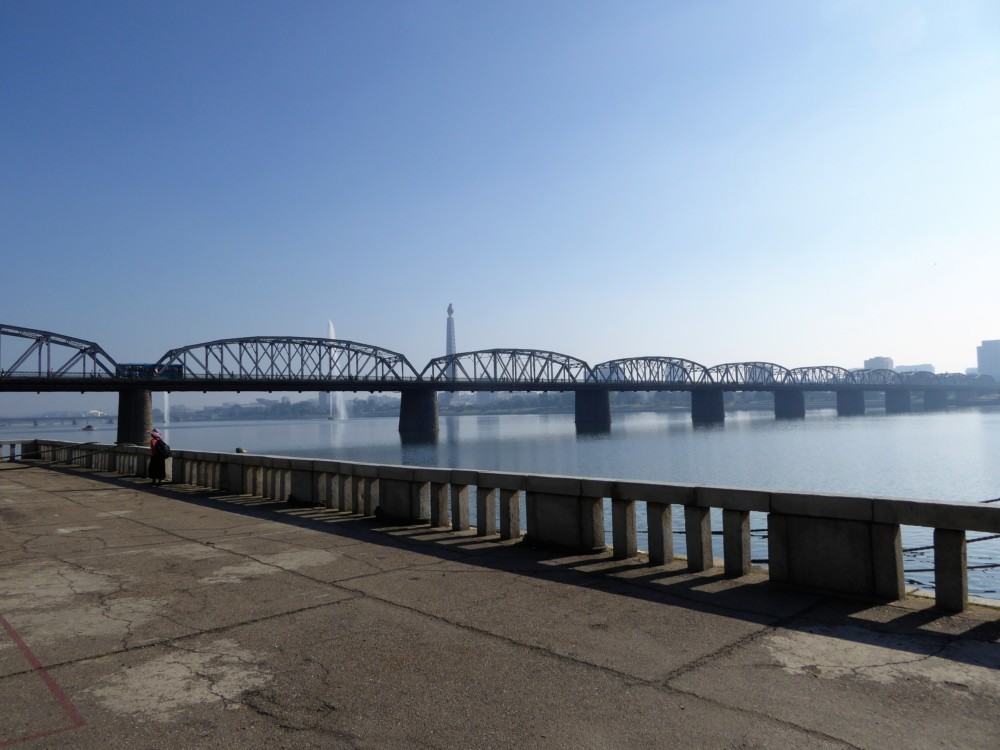 I tried to share as much information as possible without sounding antagonistic. I was trying to open her eyes without preaching. 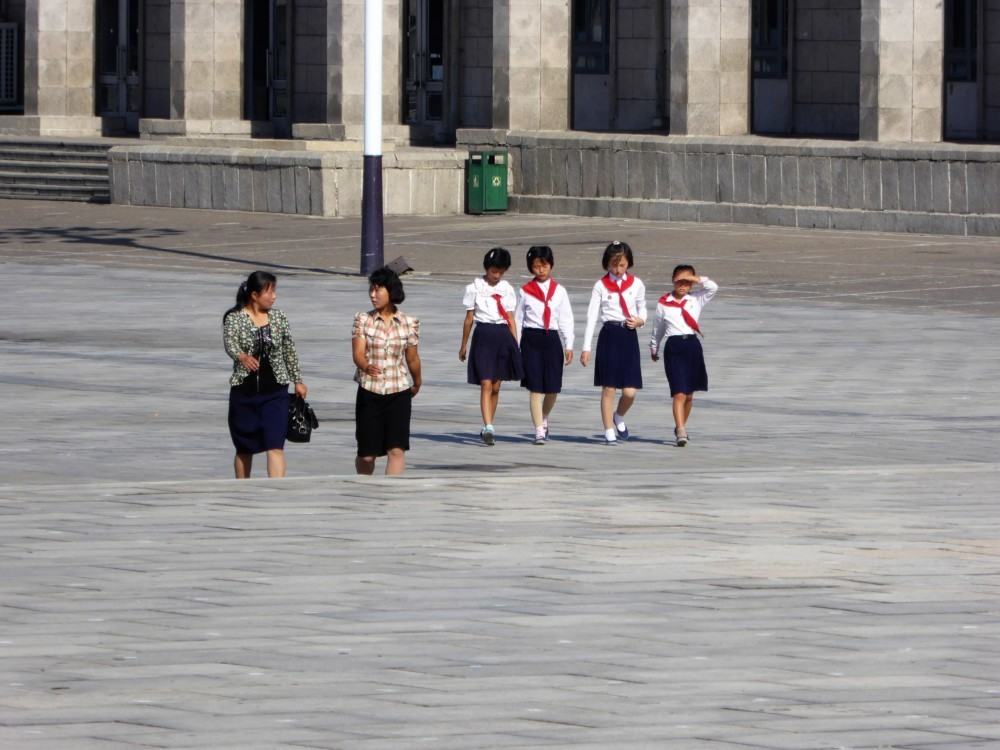 Often, we were asked how outsiders perceived North Koreans. I explained without compromising myself, that the outside world did not understand North Korea, but that not all the news was negative. In the meantime, we learned that most North Koreans want to reconcile with South Korea, and to become one unified Korea. 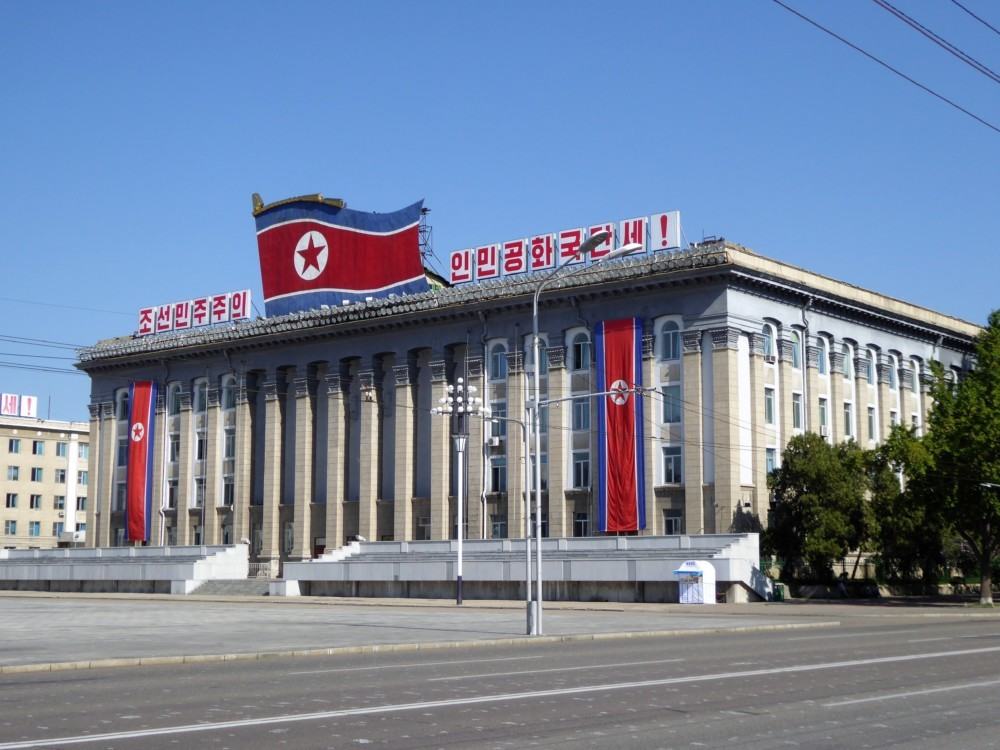 Unfortunately, North Koreans are brainwashed into believing that the “imperialistic” Americans are controlling the South Korean “puppets” and preventing this reunification. 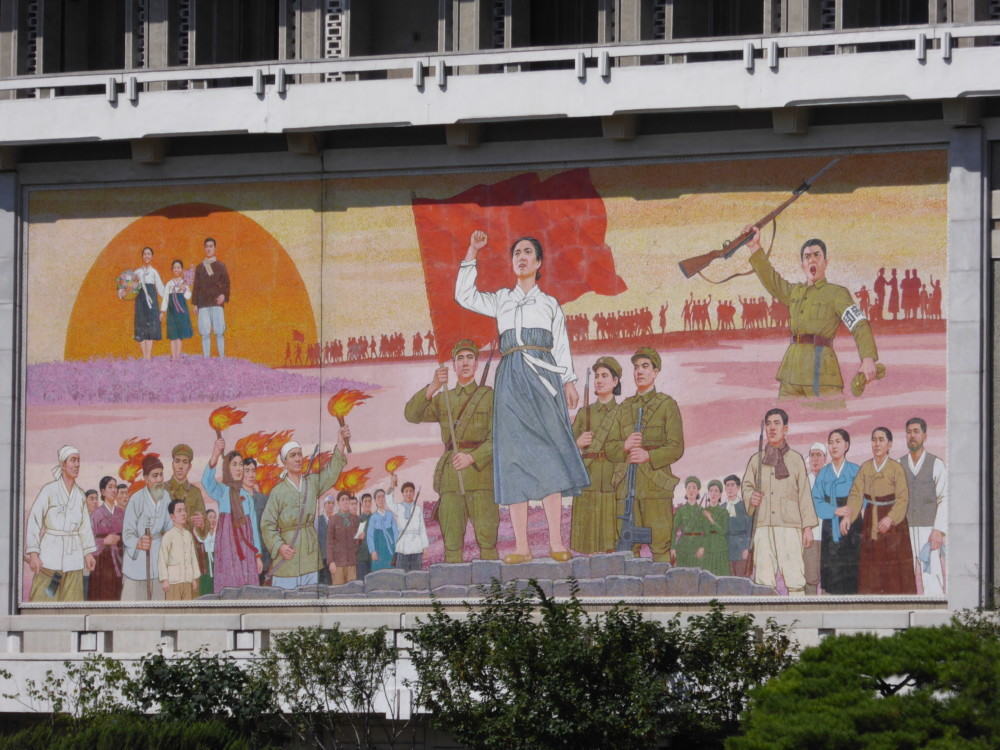 How do you explain the world to someone who has never left their country, has no access to outside information, and has no concept of how much they are brainwashed? This was my challenge for the duration of my stay.

As the days went by, I was more and more successful in learning how North Koreans really view the world. They have hopes and dreams just like the rest of us, and most of those dreams involve living in peace. They unfortunately do not realize that their government is primarily responsible for preventing this peace. 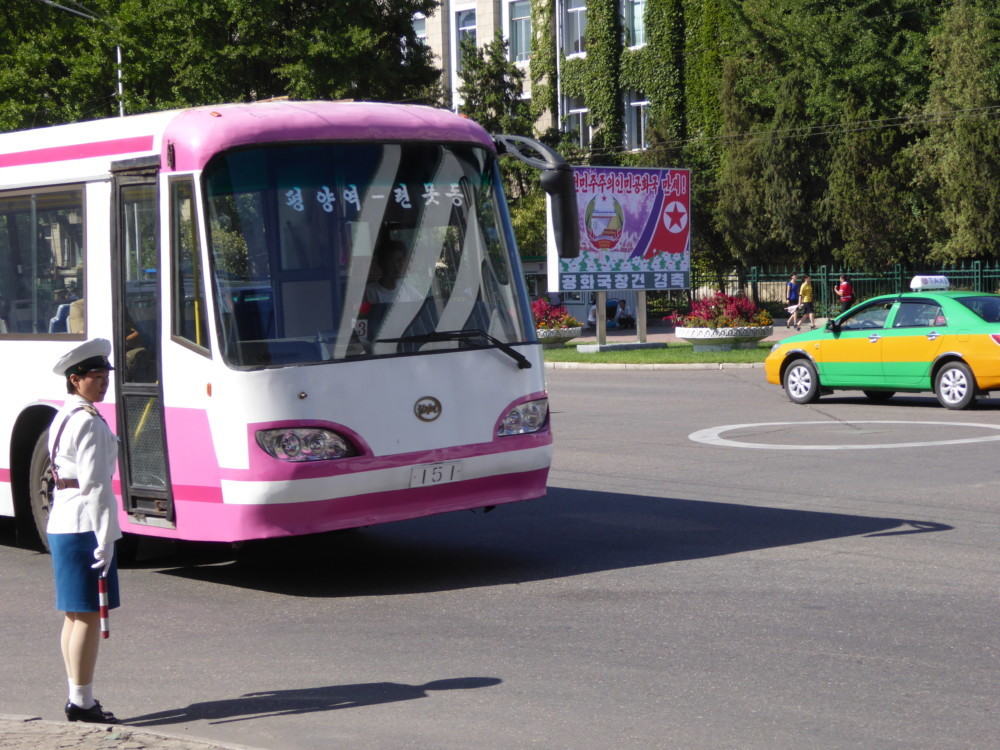 I strongly believe, that having tourism is a crack in North Korea’s armor. It allows outsiders like me to bring in fresh ideas that they would not normally have access to.

At one point, I was able to take out my computer to show different international travel pictures. Seeing the wonder in their eyes was both special and heartbreaking, as I knew that the odds were, unless the regime changed, they could never view such beauty with their own eyes.

Visiting the Mansudae Grand Monument was a study in human greed. Here was a population that was starving and huge grotesque statues of Kim Jong-Il and Kim-ll-Sung were placed in the center of the city to be worshiped. Locals would line up to drop off flowers, while soldiers patrolled. 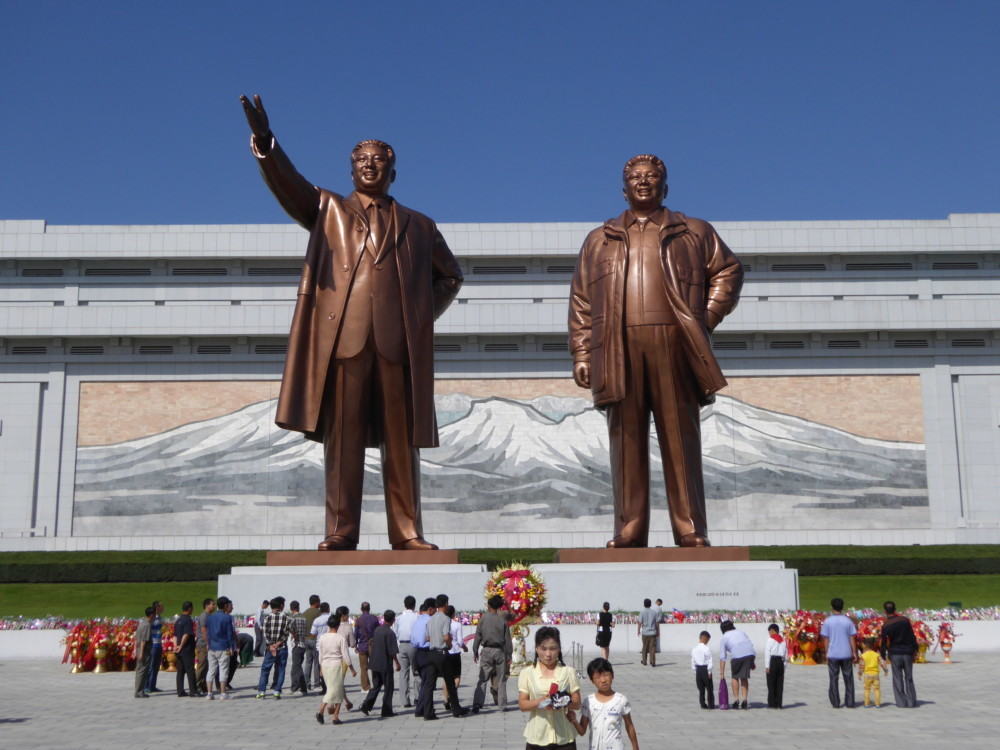 I managed to take a few illegal pictures of the soldiers as the guides were preoccupied with paying respect to the their Gods. 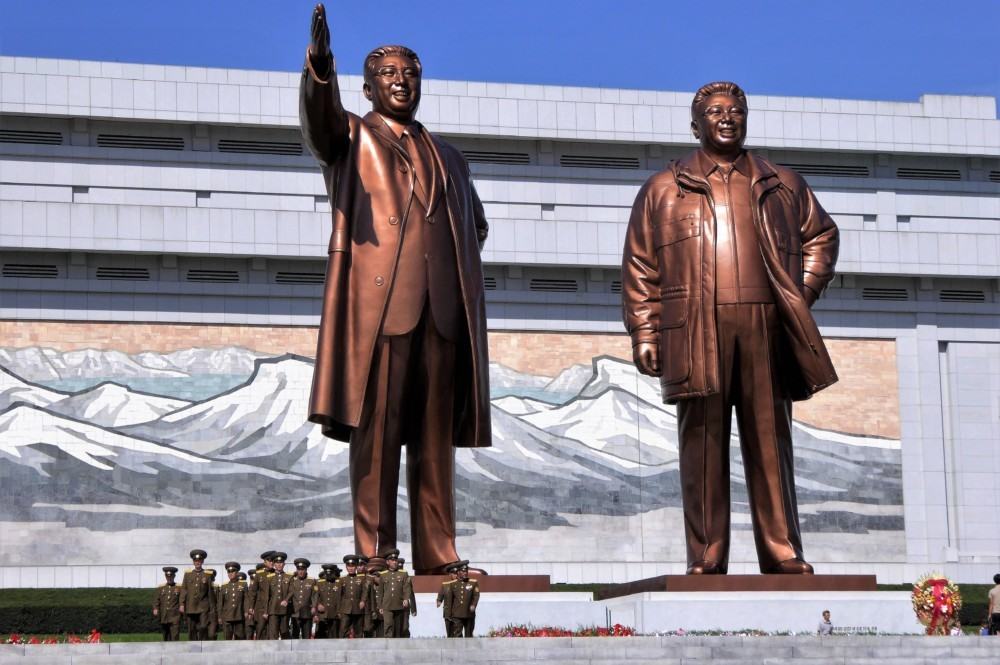 Unfortunately, seeing Kim Jong-Il and Kim-ll-Sung was something that I would come to dread. Every single room in each building has two pictures side by side of Kim Jong-Il and Kim-ll-Sung. To have any dust on the picture frames, or to have them missing, is a serious offense and is considered treasonous. It’s enough to send a North Korean to labor camp. It’s to ensure that no one can ever forget the “dear” leaders are watching. 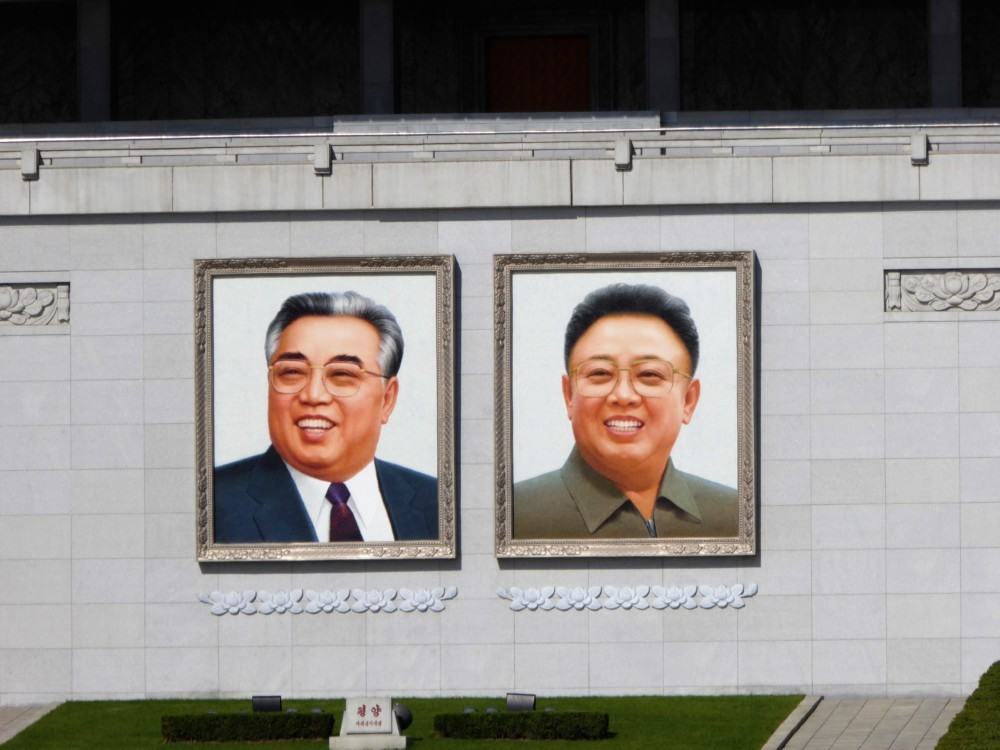 While a lot of what I saw was negative there were some surprising positive elements. The sense of community that I saw was inspiring. People were not distracted by technology, they interacted with each other. There was a sense of innocence that is missing today. I was also impressed with how equal of a society North Korea is when it comes to gender. Men and women were treated equally, and both had the same career opportunities. It was odd seeing this equality when so many wealthy countries struggle with this. 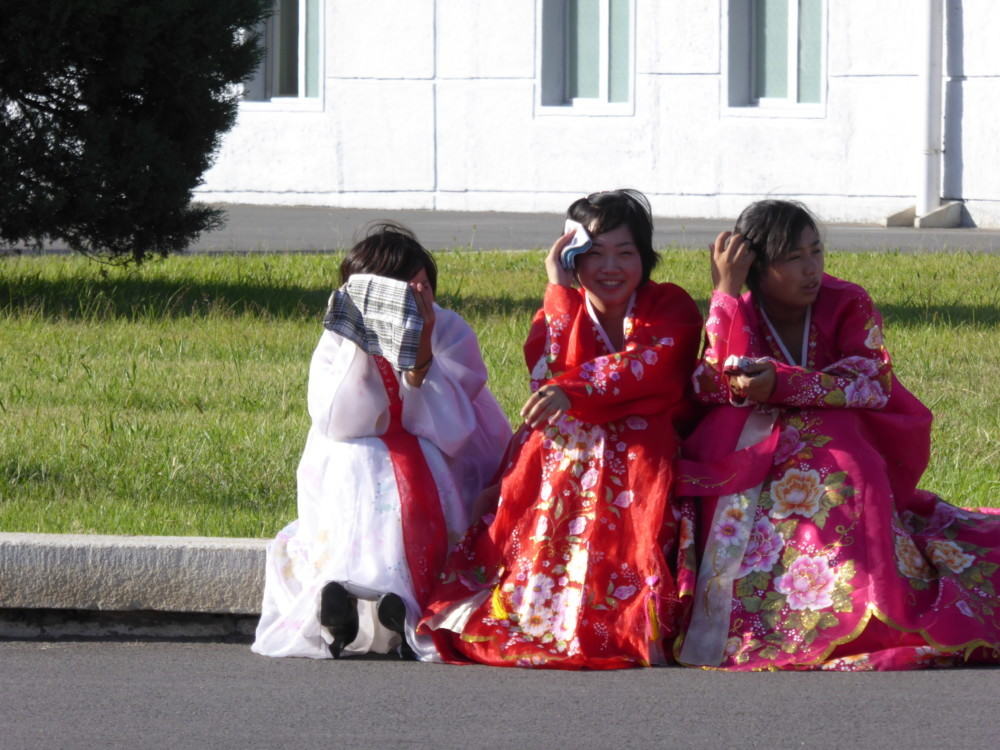 Nonetheless, even with these positive traits, it is undeniable that there is a lot wrong with North Korea. I hope that one day these people can be free. These initial few days in Pyonyang really opened my eyes to the mindset of the average North Korean. After an exhausted two days touring Pyonyang, my next destination was the DMZ.